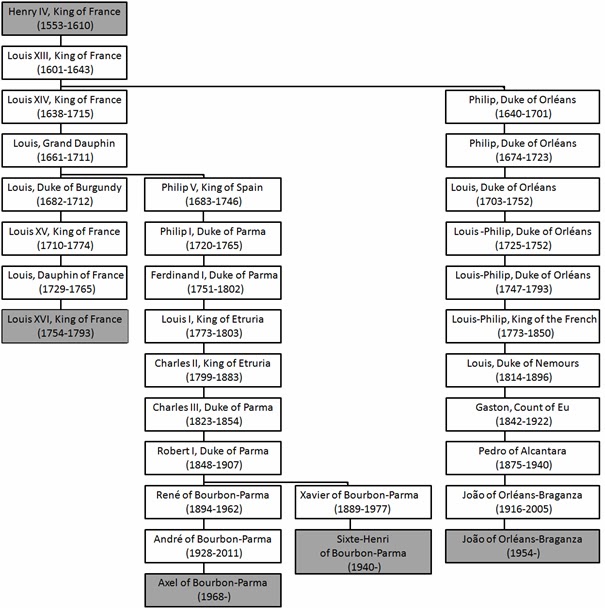 Two purportedly royal relics recently surfaced on the collectors' market in France: a mummified head and a handkerchief with blood residues. The head was said to be that of French king Henry IV and the blood on the handkerchief that of King Louis XVI. This was confirmed by Spanish and French researchers, who reported positive DNA matches. Several historians voiced doubts about these claims and enrolled the help of forensic identification specialist Professor Jean-Jacques Cassiman and his team to investigate the relics.

Professor Cassiman's team compared the published DNA results from the head and the blood in the handkerchief with DNA samples obtained from three surviving descendants of the house of Bourbon, progeny of Henry IV (see Figure 1). The genetic relationship between these three Bourbons, who come from different branches of the family line, is fixed on the basis of research carried out on the Y-chromosome. The DNA comparison found that there was no relationship between the Bourbons and the blood on the handkerchief, nor the mummified head. Two breaks in the biological line on the paternal side would have had to occur in order for the head and the blood to belong to the two French kings.

Likewise, there was no evidence on the maternal side (based on the mitochondrial DNA testing) suggesting a positive identification of the relics. The mother of Henry IV, Jeanne III d'Albret, is related via Anna of Habsburg in an unbroken maternal line to the Habsburgs, including Marie-Antoinette and Louis XVII (see Figure 2). Here, once again, there would have to have been at least one break in the maternal line for the head to belong to King Henry IV. The probability that one of the women in King Henry IV lineage was not the real mother of her daughter, or of the king himself, is virtually non-existent.

Furthermore, DNA tests of the blood on the handkerchief show with 84.2% certainty that the blood belonged to a person who did not have blue eyes. It is known that King Louis XVI had blue eyes.

Based on these conclusions, the team of Professor Cassiman is unable to confirm the conclusions of their Spanish and French counterparts, given the available data. The blood on the handkerchief almost certainly does not belong to Louis XVI. Too little DNA remains were found on the mummified head to confirm or deny that it is the head of Henry IV, although historical data makes this identification unlikely.

According to the researchers, the study shows that a reliable genetic identification of historical remains requires a DNA profile of the living paternal and maternal descendants of the 'donor' to which the remains purportedly belong.